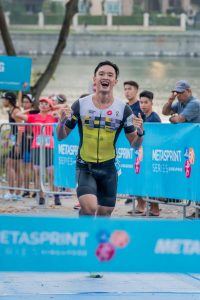 respectively. Ibrahim’s victory was a long time coming, with the Singaporean patiently polishing his craft over recent years (he came seventh in 2018 and third in 2019). His effort in beating home Middleditch by 11 seconds means he levelled “The Equalizer’s” battle of the sexes competition with a win for the men. The score sheet now reads 1-1 with one race left in the series.

The “Equalizer’s” Champion of Champions race at each of the three MetaSprint Series events sees the female elites given a head start on their male counterparts, with the handicap based on the time difference at the previous 3 year’s corresponding race.

For the 2020 MetaSprint Duathlon, over a 3km run/18km bike/3km run distance, the elite women started the racing action at 6:33am, with the men set off to chase exactly 6 mins and 37 seconds later.

Daylight was still breaking as the women headed out on the opening 3km leg of the run-bike-run contest which largely followed the Kallang River.  As the strung-out field came back in sight of the race village it was Singaporean athlete (and reigning champion) Emma Middleditch who was at the helm, and she duly hit T1 first with a lead of some 34 seconds from New Moon KHcycle team mate Valerie Yong, and April Rice from Canada a further 10 seconds behind.

The local youngster then executed a solid bike leg, not panicking when Rice begun to cut into her lead with every lap. At the end of the three laps there was just 3 seconds separating the pair. A special mention to British athlete Victoria Hill who eventually had the fastest female bike split of the day with a 31 minute 48 second time over the 18km course. Middleditch entered the final run confident of her running ability over Rice, putting 67 seconds into the Canadian over the 3km leg and breaking the tape unchallenged in a time of 56 minutes 9 seconds to take the Women’s title. Interestingly, in 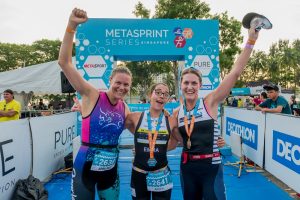 what is a good reflection of Middleditch’s growth as an athlete, her winning finish time on Sunday was two minutes faster than last year’s. Second place went to Rice with a time of 57:22, and Casterton who had a solid race was the third female overall two minutes and twenty-six seconds behind Emma.

Emma was obviously delighted in claiming the women’s crown “I started off in the lead and managed to put in a good distance to the other girls going onto the bike. April almost caught up to me at the end of the bike, but I managed to hold her off on the run so I was happy with that”.  And did she know that Ibrahim was coming fast from behind on the final run? “Actually, I didn’t know he was right behind me, but when he overtook me I realised” she said with a smile.  And there was even time to look around at the scenery “it was a really nice sunrise that I noticed on the bike” she laughed.

In the men’s race, the pace was pushed early by a group consisting of Frenchman Benoit Besnier, young gun Valentin Van Wersch and Ibrahim. Besnier led the group into transition one, with a zippy 9:30 for the 3kms. 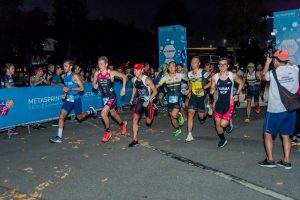 The trio exited transition together with Van Wersch in the lead at the end of the first of three laps, nine seconds ahead of Besnier.  Danger was lurking behind however, with Swiss cycling phenomenon Joel Liebi burning rubber as he made his way through the field, narrowing a forty second deficit after the first run to just twenty seconds by the end of lap one.

Lap two saw plenty of excitement, with Ibrahim taking the lead from Van Wersch, and Liebi moving into second, just two seconds off the pace and Van Wersch thirteen seconds further back.  Liebi finished with the fastest bike split of the day 26 minutes 57 seconds, and more importantly he came off the bike in first place, running into transition two with a twenty second lead over Ibrahim, and Van Wersch 34 seconds further behind.

Liebi wasn’t a match for Ibrahim however, and as soon as he slipped on his running shoes for the second time he ran his way to the overall win. Benoit used his running strength to also pass Liebi and claim second place, with Liebi holding off a fast-charging Van Wersch for third.

Ibrahim summed up his strategy after finishing in the top 10 of this event in the past two years, “My game plan was to stay in the front pack in the first run, and not go out too fast too early. I ended up coming in 2nd or 3rd in the first run, then I decided to take it easy in the first lap of the bike.  I took the lead in the second lap before Liebi took over in the third lap.  I decided to let him go ahead but stay in striking distance for the final run.  At the 1km mark of the second run I caught him, then April and finally Emma before the 2km mark. Then I realised Benoit was just behind me and he was going fast, I was pretty scared. So I decided to let loose, since there was only five minutes at most left on the course.”

The Youths contests, for athletes aged 12-15, are raced over a shorter 1.5km/12km/1.5km version of the Sprint course.

The male Youth’s race was a one man show, with Pedro Hutchinson leading from the gun to take a four-minute victory, finishing in a speedy 33 minutes and 58 seconds. Isaac Tan and Sukrit Surender Kapoor had a battle of their own for the remaining podium spots. Tan took second, with Kapoor coming third fifteen seconds in arrears. 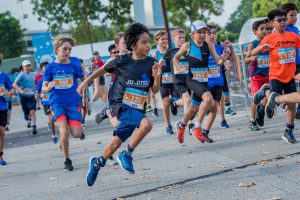 The final races, of a day in which some 1,500 duathletes of all ages competed, were the Kids events for boys and girls aged 8 to 11. They completed a 700m/6km/700m challenge and rose to it with style, with Hugo Tan and Hana Maeda winning the boys and girls races respectively.

The near perfect racing conditions in the city location, was an exhilarating experience especially for the 360 first-timers who graced the course – many going on to ring the new “personal best bell” with satisfaction. As if that wasn’t enough, the 2-8 year olds rounded out the morning’s racing in cute style with their own “Super Scoot” and balance bike race, courtesy of Decathlon. The fun continued once across the finish line, with massages, live music and good coffee leaving everyone smiling.

And so, the 2020 MetaSprint Series moves onto the concluding Triathlon race at East Coast Park on April 19. It won’t just be the elite athletes who’ll be chasing overall series glory, all the many age groups in the Sprint, Discovery, Youths and Kids divisions are up for grabs. An exciting morning of action is guaranteed. 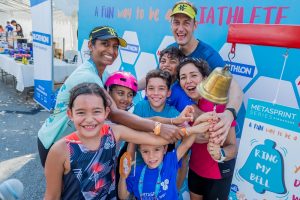 For details of the MetaSprint Triathlon, including how to enter, go to www.metasprintseries.com.