New course a hit at the MetaSprint Series Aquathlon

Sunny skies greeted athletes at beautiful Palawan Beach on Sunday morning, and the new Aquathlon course received the gold stamp of approval from both elite and age group athletes.

Teenage prodigy Emma Middleditch representing Singapore claimed a popular victory taking the Women’s Elite and Champion of Champions titles, narrowly beating the fast charging men’s champion, Frenchman Arnaud De Lustrac to the finish line. But Middleditch didn’t have it her own way, being beaten out of the 750m swim by fellow teens Regine Goh and 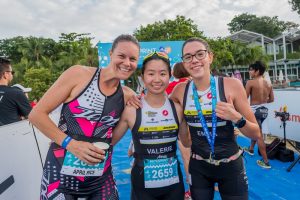 Elizabeth Rose who had zippy 10:03 and 10:05 swim splits respectively, and 2019 champion April Rice, leaving Middleditch with a 28 second deficit to make up.  She found her groove quickly once on the 5km run course however, catching the three escapees within the first kilometre. From there it was a matter of keeping the fast closing men at bay as she progressed around the twisting and turning run course.  At the 3km mark her lead was just under 2 minutes but dropping fast as De Lustrac was moving at 3:16 mins/km pace.  Middleditch settled into her own sub four-minute groove and turned into the finish chute proudly to take victory by 46 seconds over De Lustrac and take the “battle of the sexes” Champion of Champions title.  April Rice held on for second place in the women’s race 1 min 23 seconds behind, and Valerie Yong a further 1 min 40 seconds adrift.

Middleditch was obviously pleased with the way the race unfolded “I’m really happy with my race. I didn’t do too badly on the swim, and I tried to push it on the run. I managed to catch the lead girls quite quickly, and then make sure the boys weren’t going to catch me”.  The new course also got the thumbs up “I thought it was really fun. It was more technical and challenging than last time. The loop around the green was fun, and the uphill was another challenge. It keeps it interesting and people can see one another and see if they need to accelerate.”

The men’s race was much closer, with reigning champion Rahul Jegatheva of Australia giving De Lustrac a real battle out on the course.  Jegatheva appeared first out of the water, with a 10-second advantage over the Frenchman, and thirty-second lead over local Nicholas Rachmadi. 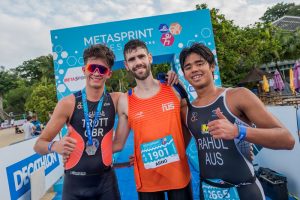 Jegatheva held the lead through the 3-kilometre mark, where he was 20-seconds ahead of Malaysian based teenager Oliver Trott with De Lustrac a further 4-seconds back.  It was the small hill on the return leg from Siloso Beach that was the decisive moment that De Lustrac attacked Jegatheva who couldn’t respond, and so it was the Frenchmen who held the lead to the finish holding off the Aussie by just 10-seconds.  Trott filled the last podium position, crossing the line a further minute behind.

De Lustrac was delighted with his race “I felt pretty confident in the water, Rahul was swimming pretty fast, so I tried to keep up with him. I actually fell over in transition and lost more time, and then got nervous because Rahul was running really well.  However, I kept pushing and managed to overtake him with 1km to go, but I couldn’t give up an inch because he didn’t stop pushing and I knew he was still behind me.”

The men’s champion also liked the new course “It was really fun, especially in a short format like this. Getting out of the water and diving back in, that was intense! Also, the hills require more of a mental aspect, rather than just even pacing yourself it all the way. I actually overtook Rahul over the hill (smiling). It was lots of fun and more interesting than just 5 kilometres of flat. Plus, the out-and-backs meant I could see Rahul almost all the way. The event was really well organised, it was so much fun I really hope I can come back and do that again”.

The enthralling morning of racing saw participants of all ages and abilities enjoy the perfect racing conditions.

In the always competitive Youth category, Isaac Tan won the boys race after a come-from-behind battle with William Pearce and Timothy Ting over the 250m swim & 2.5km run distance.  Ting and Pearce exited the swim neck-and-neck, with Tan four seconds behind. However, Tan asserted his 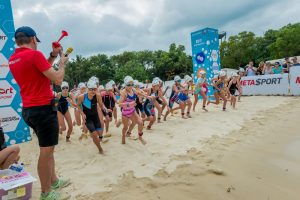 authority over the race quickly, and by the 1.2km mark had gained a 19-second advantage over Pearce.  He extended this to cross the line and take victory 50-seconds clear of Pearce in a time of 13 minutes and 3 seconds. Pearce held off a fast-charging Ting to take second by just two-seconds.

The girls Youth race was also a closely fought affair, with Wan Ting Lim, Clemence Chomienne and Stella Crow racing within a stones-throw of each other for the first half of the race. Ten seconds separated them out of the swim, with Lim having the advantage.  This was narrowed to six seconds as they left transition, before Lim started to put some time into the pair and by the 1.2km mark she had an 18-second margin.  She crossed the finish line in 13 minutes 53 seconds, 22 seconds ahead of Chomienne in second and 23 seconds over Crow who took third.

The Kids 150m swim and 1.5km run race showed similar class, with Hugo Tan winning it for the boys over Vincenzo Ucchino and Matz Waardenburg.  Hana Maeda, a regular face on the podium, took victory for the girls with Laura Pelissier coming runner-up and Janine Ha taking third.

The family vibe during the morning was evident with Mums, Dads, and kids of all ages taking part – even the youngest of competitors got to have their moment of glory in the Kids Splash ‘n Dash.  Clubs and Schools enjoyed 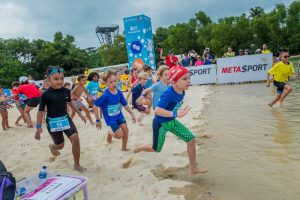 their own competitions, with SMU winning the Club Champion trophy, and International French School taking the School’s crown.

The second leg in the series, the run-bike-run MetaSprint Duathlon (set for March 8), gives rookies a chance to cycle in the safety of wide, closed roads, and by the time the closing MetaSprint Triathlon comes around (April 19), the newcomers are ready to put all three triathlon disciplines together if they choose to do so. Then, those who will have gotten the bug will step up at the Olympic Distance of the Bintan Triathlon in June, and again at IRONMAN 70.3 Bintan in August.

As many happy faces left the venue at the conclusion of the event, it was living proof that the MetaSprint Series really is “a fun way to be a triathlete”.

Full results for the MetaSprint Aquathlon can be found at www.metasprintseries.com/race-results/.