15 years of MetaSprint Series! It has been a beautiful journey from the modest beginnings to the multi-sport festival it is no. Enjoy this nostalgic flashback, whether you have been with us  from the start, or you’re a newbie to the sport .

…That the inaugural edition of the MetaSprint Series was called the “Tribob Singapore Sprint Series”?

MetaSport was known as Tribob until 2011. In 2012 the event name changed to the “New Moon KHCycle MetaSprint Series” thanks to title sponsors “New Moon” and “khcycle”. From 2015 the series has been known as the “MetaSprint Series Singapore”.

…That the MetaSprint Series has introduced the sport of Triathlon to over 13,000 newbies to date

Our vision  was to make the sport of Triathlon accessible to all and tear down the myth about the difficulty of the sport. The rationale used was that most people are capable of running, cycling and swimming a short distance. What makes the sport daunting to most is the idea of putting the three disciplines together. Hence the idea of creating a series made of stepping stones (where the first race would be a swim + run, and the second race a bike + run) leading to the completion of a triathlon.  The series was an immediate hit. In 2009 we added a “Mini” distance at the Aquathlon to allow for more people to have a go, and in 2010 the mini/discovery, kids and youth athletes entered the fray at all three races. The latest addition to the MetaSprint Series was in 2018 with the FUN races for 4 to 8 year-olds.

Due (or thanks) to the growing number of athletes and race distances, the MetaSprint Series has turned into a multi-sport festival for all ages and abilities. It has introduced to date 13,000 people to the sport of triathlon. For some triathlon became a ticked-off bucket list item, but for many more it has become a lifestyle.

…That the MetaSprint Series previously had events at Mandai Road, in Sengkang and at Changi Beach?

We wanted new, better and more exciting venues for ourSingapore athletes. Fortunately the number of athletes at our races during this time were much lower so we did not need venues as large  as we do nowadays.

Aquathlon:
Tanjong Beach, our first Aquathlon venue, is still Sentosa’s prettiest beach. However, we soon outgrew the space and  the event moved to the Sapphire pavilion at Siloso Beach. [Fun Fact: at Siloso Beach we had deep water swim starts instead of beach starts.] The event outgrew Siloso Beach in 2012 and shifted to its current  venue at Palawan Beach. 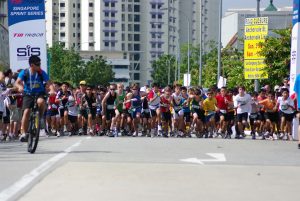 The following venue at Sengkang/Anchorvale will never be replicated, as the area has now been fully developed. In 2010 there was only the Sengkang Riverside Park and Swimming Complex. In contrast to Mandai this course was pancake flat.

Since 2014, the Duathlon has been held in the city. The big, wide and fast roads of Nicoll Highway were the next step up in the event’s progression.

From 2008-2015 we believed Changi Beach Park was the best venue for a triathlon race in Singapore. The venue itself was a bit of a squeeze and harder to get to, but fully worth it for the race experience. The swim course was less affected by currents than East Coast Park, and Changi Coast Road provided an awesome bike course. With the development of the airport’s new terminal 5, getting approval for the closure of Changi Coast Road on race day was a no-go, so we had little choice but to look for a new triathlon venue that could host over 2,000 athletes. Angsana Green at East Coast Park is currently the only venue left in Singapore for this size of event. Having said that, by looking for the best tides and continuously tweaking the bike course setup, the MetaSprint Triathlon is now (arguably) at least on par with the race experience at Changi.

After a lost ‘COVID’ year in 2020, we managed to put on the triathlon again in 2021 with sheer force of will. Nparks not being open to hosting this size of events, we sought refuse at Sentosa and complete the bike leg on high-tech Wattbike trainers. No matter how proud we are of, we do look forward to going back to the traditional format in 2022. 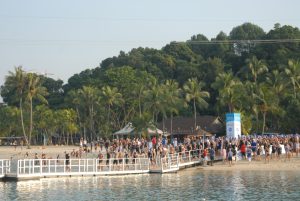 In 2010 and 2011 we used the bridge crossing the bay at Siloso Beach as the check in funnel to race start. Athletes would enter the water from the little island on the other side and start from the water behind an invisible start line marked by buoys.

…That no athlete has ever won the MetaSprint Series three times?

However, there are four athletes that have won it twice; Emma Middleditch, Colin O’shea, AJ Anderson and Sebastien Calle. Emma Middleditch’s attempt for a hattrick in 2020 got foiled by the COVID pandemic.

Although Singapore has provided only two Series Champions with Winona Howe and SEA games bronze medalist Wille Loo, it doesn’t mean they haven’t been close. Singapore’s top endurance triathlete Choo Ling Er tried her hand at the short stuff and finished second in 2008 and 2009. In 2020, Ahmad Arif was in a good position to be the next Singaporean Series Championship, but he never got to finish the Series off.

Whether there will be a Series Championship in 2022 is decided when we can announce the date and format of the Triathlon. 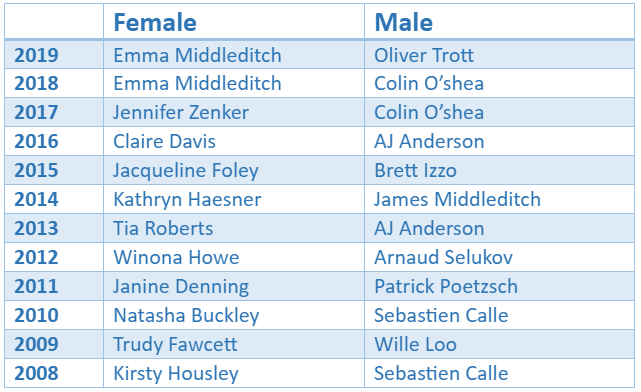 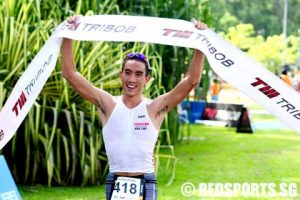 Wille Loo, 1st Singaporean Champion of the MetaSprint Series. This is his finish photo at the Triathlon at Changi Beach Park. 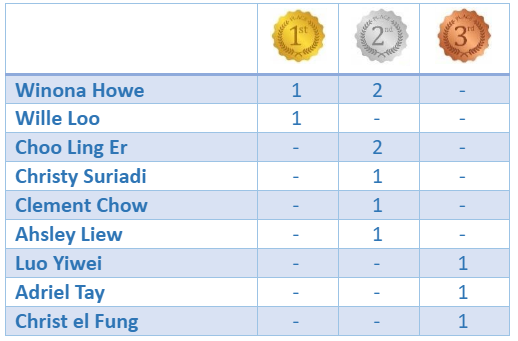