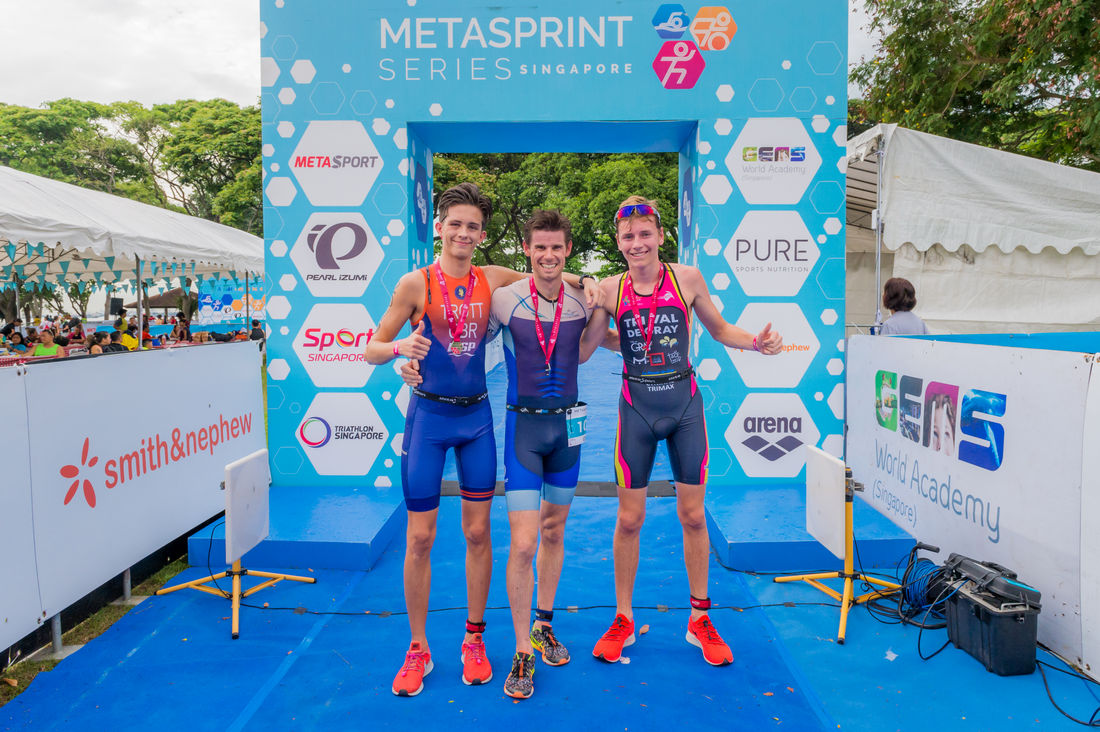 The 2019 MetaSprint Series concluded today with a hugely competitive MetaSprint Triathlon, which saw defending champion Colin O’Shea clinch the men’s title, and Champion of Champions glory, with a scintillating time of 58 minutes and 52 seconds.

Now in its 12th year, the MetaSprint Series has proven it lives large in the hearts of Singaporeans, with today’s race welcoming over 2,000 competitors and hundreds more supporters and spectators. The race village was alive on what was a cool and overcast Sunday morning at East Coast Park, the traditional home of triathlon in Singapore. As well as the sprint-distance contests which give the MetaSprint Series its name, also on the program were the usual Discovery, Youth and Kids races, and returning this year the Kids Scootathlon. The series truly is “a fun way to be a triathlete”.

The elite women’s wave kicked off today’s action at 7:50am. The leading ladies started five minutes and 15 seconds ahead of the men’s elite wave; this time gap, or “Equaliser”, is what sets the tone for the Champion of Champions element of the series. The Equaliser is calculated on the difference between the men’s and women’s winning times in the previous three years races.

The strong swimmers built a commanding lead, taking advantage of the conditions. Great Britain’s Sam McInnes led out of the water with a 14 second advantage over the pair of April Rice from Canada and local girl and 2018 Overall Series Champion Emma Middleditch. For McInnes there was trouble lurking behind, as Middleditch tore through T1 and onto the bike, and begun to eat into her lead. She had made up the gap by the end of the first lap and entered the second looking strong. However, Rice threw her hat into the ring in at the end of the second lap, using her strongest weapon to claim the lead and record the fastest female bike split of the day of 30 minutes 33 seconds.

The Canadian hit T2 in the lead, but by the time she exited on to the run course Middleditch had already used her firepower to sneak ahead and take first position. From there she consolidated, using her stellar run prowess to her advantage with a 20 minute 3 second run split to extend her lead to finish nearly three minutes ahead of Rice, with McInnes a further minute behind. The result also meant Middleditch would take home the overall Series Champion trophy for females.

Special mention goes to British athlete Katie Allen, who started in her age group wave of F25-29 but splashed out the day’s fastest female swim split of 11:29, and the second fastest run time to take second spot on the overall women’s podium.

Post-race, the smile on Middleditch’s face said it all.

“I managed to get out of the swim in a good position, so I was really happy about that. On the first lap of the bike I overtook Sam, then April took the lead until the end of the bike. But I had a fast transition, then I tried to keep a good pace on the two laps of the run.

While Middleditch had some close rivals to fend off enroute to her victory, the men’s race was a little more one sided.

O’Shea executed a dominating performance, leading from the gun to exit the swim 34 seconds ahead of a chase pack of Jack Heneberry and Trott, and followed a further 20 seconds by Cosulich and Van Wersh. Onto the bike leg and O’Shea held his lead, while a group consisting of Trott, Van Wersch, Cosulich and Frenchman Benoit Besnier tried to close the gap.

O’Shea hit T2 and onto the run course, where he consolidated his lead over the two lap 5km course. To cheers of the crowd, he hit the finish tape 1 minute 18 seconds ahead of youngsters second place Trott and third place Van Wersch who filled up the podium. Trott’s podium spot earned him the overall Series Champion title.

Colin described his joy of racing the event “I always love racing the MetaSprint Series races, especially this race here. The conditions were very favourable, the cloud was out – it was just lovely.”

He went on to detail his race “In the swim there was a strong current from right the left, which I had to take care of. I actually lost my goggles 50 metres in, so I had to work on my sighting and I managed to get quite a good gap. I managed to have a fast transition, and then I kept my head down on the bike to keep the gap. The run was thankfully relatively comfortable.”

O’Shea commented on the new run course athletes tackled this year “one nice thing was the little hill near the u-turn, you feel it on the legs going up and going down.”

While the elite athletes were swapping race stories in the festival area, the rest of the huge contingent of athletes were either still on course or making final preparations; there were 32 different wave starts across all the events on the race card. Of the over 2,000 competitors, some 20 percent were taking part in their first triathlon, while 56 nationalities and 51 schools were represented.

Joining the action were 141 Youth participants. Open to 12-to-15 year-olds, the Youths raced over the Discovery distance, which incorporates a 250m swim, a 12km bike and a 2.5km run. These Youth races always been hugely inspiring and highly competitive affairs over the years, and it today was no different.

The fastest male Youth this morning was Zemin Goh from Malaysia, who overcame a battle with Romuo Perthius who finished 10 seconds back in second and Lucas May a further 16 seconds adrift in third.

Elizabeth Rose was the overall female Youth champ, with a time of 44:01, although the she had to hold off Malaysian Eliza Tan who was just 12 seconds behind, with local girl Wan Ting Lim coming through as the third-fastest girl.

The youngest triathletes competed in the Kids events for boys and girls aged 8 to 11; in total, 222 of them signed up to race and they were tasked with completing a 150 swim, a 6km bike leg and 1.5km run.

Go Fujimoto relied on his run speed in a come from behind victory in the boys event, winning in 25 minutes 22 seconds, six seconds ahead of Khim Zern Ling and Han Yang Ng who claimed the podium spots.

Most notable was female Hui Yi Cheung, the best girl in the Kids events who recorded the third-fastest time across both genders, and was only six seconds slower than the boy’s winner Fujimoto. Joining Cheung on the girls’ podium were Eloise Kerleroux and Jeanne Lameyse both from France.

Rounding out the action were the youngsters of the Scootathlon. Open to 3-to-8 year-olds, 86 of them had loads of fun blasting their way round a 500m-scooter course followed by a 200m run.

Full results from today’s MetaSprint Triathlon can be found at www.metasprintseries.com/results. Overall series rankings across all the events, categories and genders can be found on the website too, and among the notable highlights are MetaSport Club clinching the Overall Club Series title and Lycee Francais de Singapour capturing the Overall School Series crown.

While the MetaSprint Series won’t return until February 2020, top-class multisports action continues in June with the Bintan Triathlon festival from June 7-9. Go to www.bintantriathlon.com for full information and to register for Asia’s premier triathlon event, which features the Sunset Swim Classic, the Sprint Distance, Youth, Kids and Fun Duo contests in addition to the blue ribbon Olympic Distance race on the Saturday afternoon. Note, prices increase on 2 May .

The next MetaSport event to take place in Singapore is the CSC Run by the Bay, scheduled for 12 October and now open for registration. A sunset start, age-group ranking and iconic 12.8km round-the-reservoir loop in addition to a 21.1km, 6km and 1.28km Kids distance make this event popular. The next multisport race is the City60 Bike-Run Challenge on October 27, Registrations for that exciting city-centre event open next month at www.city60bikerun.com.