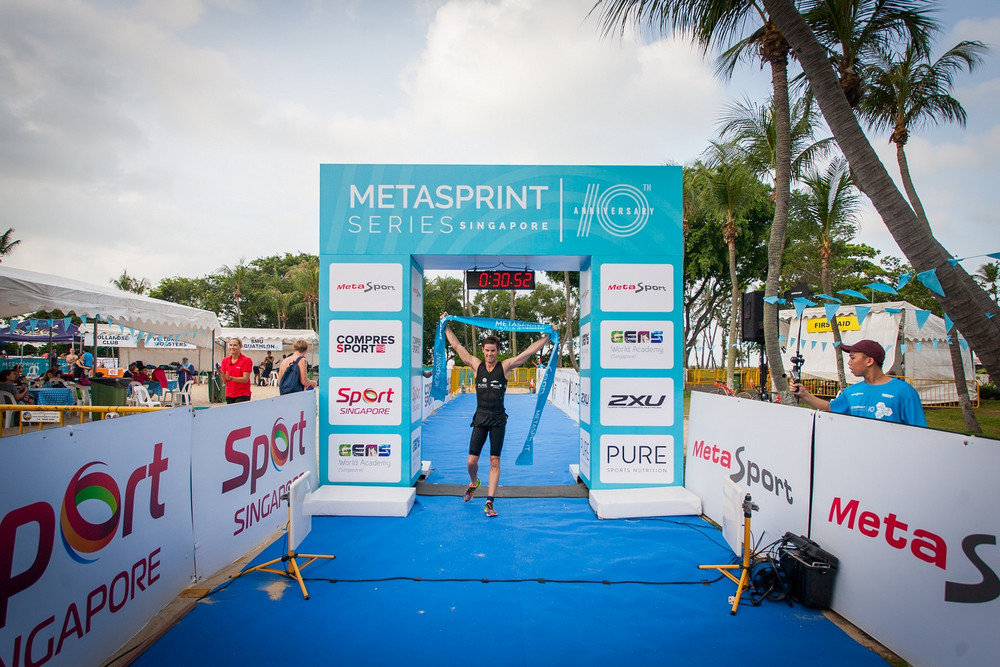 Colin O’Shea is the Aquathlon Champion of Champions!

Colin O’Shea and Christi Suriadi went straight to the top of the 2017 MetaSprint Series standings after they respectively won the Men’s and Women’s MetaSprint Aquathlon races at Sentosa yesterday.

The sun always seems to shine on the MetaSprint Aquathlon, and it was no different for the 2017 edition as blue skies and already quite high temperatures greeted the thousands of participants as they flocked to Palawan beach for the traditional start to the local endurance multisports calendar. Ahead of the athletes racing the sprint-distance contests lay a 750-metre swim followed by a 5km run.

The elite women splashed the action off at 8:22am. They received a head start over of two minutes, 41 seconds over their male counterparts thanks to the “Equalizer: Champion of Champions” element of the MetaSprint Series; using previous year’s times, a handicap is calculated with the theory being that the men’s and women’s winners should come together down the finishing stretch to battle it out for line honours.

The M-shaped swim layout and the natural bowl of Palawan Beach makes the Aquathlon swim course the most spectator friendly of the year, and as the lead women approached the beach at the turnaround point it was already clear to the big crowd that a group of five swimmers had separated themselves at the head of the race. But even this mini-group had stretched out by the time the first swimmer emerged from the water and towards transition. That was Melanie Speet in a time of 10:54, closely followed by Jennifer Zenker, with a gap of some 10 seconds to Zoe Bowden, Suriadi and Rebecca Round. 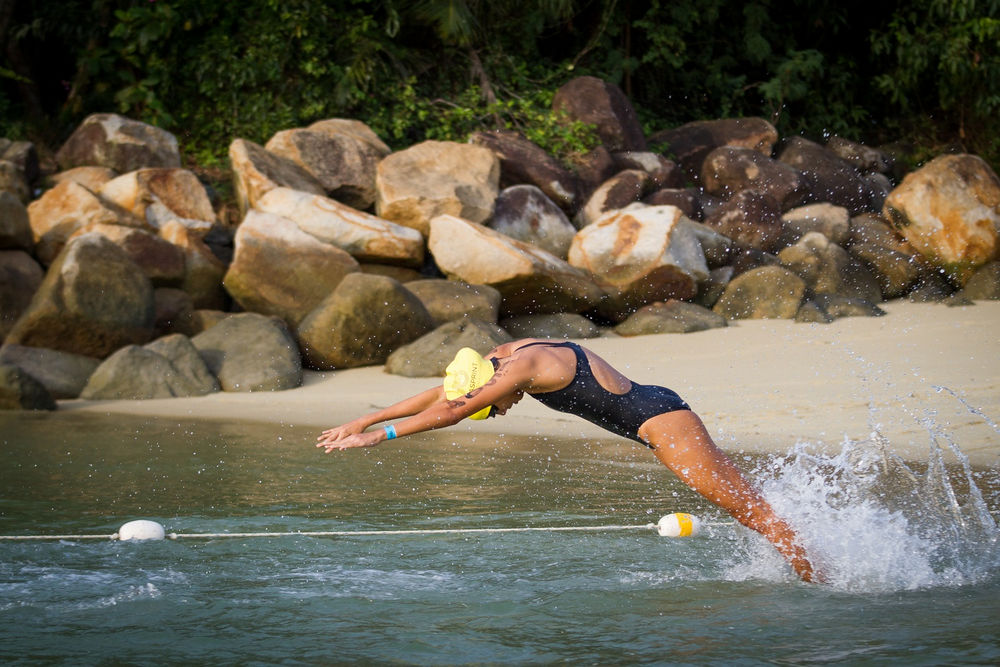 The Elite Women gets a head start and dives in first

Onto the run and Speet quickly faded, leaving Suriadi and the other three lead women to press ahead. Suriadi moved to the front of the race around the 1km marker and while she ultimately held off the rest of women for the win, it wasn’t too long before the first of the men caught her.

The head of the Men’s elite swim had a similar feel to the Women’s race, with a small pack of athletes, led by Zacharias Low exiting the water closely bunched. Low’s split for the 750m swim was a full minute faster than Speet’s.

Transition is a key element of triathlon and its cousins, especially in sprint-distance races, and O’Shea clearly demonstrated this by moving into the race lead even before hitting the run course.

The 5km run was far from a procession for the Irishman, with Indonesian superstar Wibowo hot on his heels. But O’Shea kept pushing hard and eventually managed to drop Wibowo as they ran eastwards along the Sentosa coastline towards the final U-turn point at Tanjong Beach. Next he caught Suriadi to move into the Champion of Champions lead. There was no complacency, though, and O’Shea maintained his lightning pace all the way to line to regain the title he first claimed in 2015. His winning time was 28:13, including a 17:47 split for the 5km run. 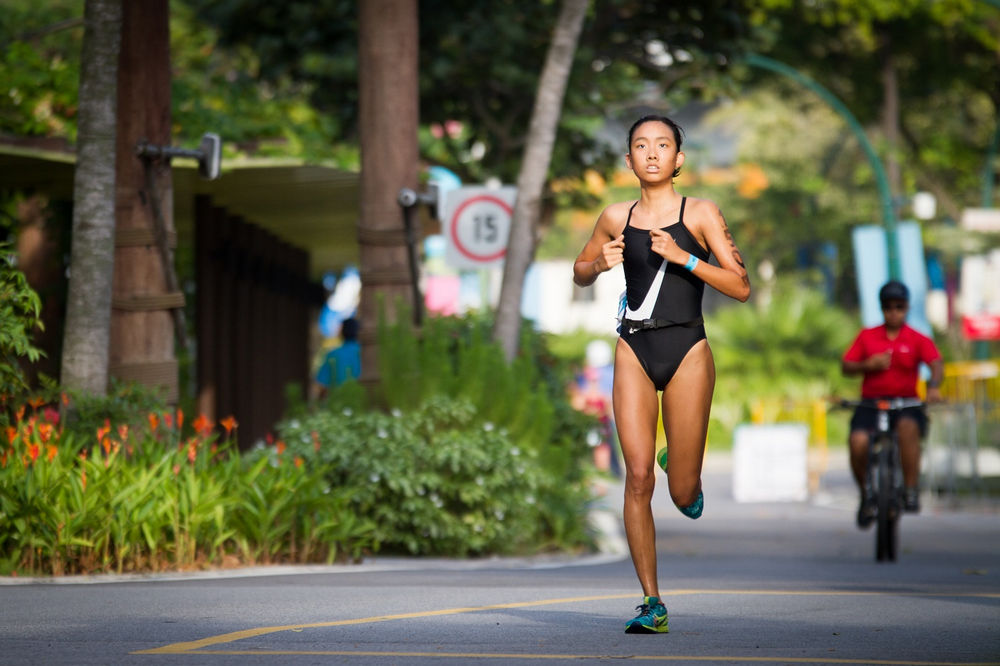 Suriadi on the run course

Wibowo was the runner-up, 38 seconds behind O’Shea, with the teenager Kiss taking a strong third, a further 18 seconds back.

Next over the line was Suriadi to claim the women’s title, in a time of 32:05. The young Singaporean had run on strongly even after the first three men passed her, and enjoyed a comfortable winning margin of some 45 seconds over the women’s runner-up Zenker. Round took the final elite podium spot among the women. It was just as well Suriadi hadn’t taken her foot off the pedal as it was revealed post race that she had incurred a 15-second penalty for a false start.

O’Shea was delighted with his win.

“It was a great start to the year, I’m really, really happy with that. It was my first race since November, and as always was greatly organised by MetaSport,” he said.

“I was fifth or sixth out of the water, it was a very competitive and physical swim and then the transition, I managed to have a very quick transition, came out first, and then push ahead on the run.”

“On the run I heard Andy breathing behind me for quite a while, he’s a fantastic athlete so I was very conscious that he was there, so I tried to push on as hard as I could. I opened up a gap but given Andy’s ability I just wanted to push all the way through because he could have come at me at any time. So I was thankfully unchallenged to the end but always aware that there was some really good competitors behind me.”

O’Shea was also crowned the Aquathlon Champion of Champions.

“Yes, I caught Christi, she was running very well, so well done to her for her great result,” he said.

O’Shea had revealed concerns about a knee injury two days before the race.

“The knee was okay, it held up, fingers crossed. So we’ll continue with training after this and hopefully push on a bit more,” he said.

He revealed he won’t be pushing on at the next race in the series, the MetaSprint Duathlon.

“I’m not doing the Duathlon, I’m leaving that to my wife Donna to do, and I’ll be looking after my little boy during that race. But I will do the triathlon.”

Women’s winner Suriadi was also very happy with her victory but also a tad relieved.

“It think my race today went really well except for the start, where I false started. So I think I’ll have a 15-second penalty,” she said before the results had been finally ratified. “I had a really good run, I was able to pace myself well.”

“After the first kilometre. I had a bit of my mantra going on in my head because yesterday when I was talking to my coach I was telling him that I was just hoping to have a good race and he was like ‘don’t hope, just do it!’, so that’s what I was thinking,” Suriadi revealed.

Then the men started to pass and this possibly helped her.

“I tried to stay with Colin O’Shea but he was a bit too fast. Andy Wibowo too. I did hang on a bit to my (Second Wind Academy) teammate Aaron Kiss,” she said.

Suriadi revealed that she too will miss the next race in the series.

“Unfortunately I’ll be overseas, but I’ll probably be here for the triathlon.”

With 100 points earned from the Aquathlon, both O’Shea and Suriadi can afford to miss the Duathlon as the MetaSprint Series overall standings are based on a “two out of three system”, with points earned in the Triathlon and either the Aquathlon or Duathlon.

Their absence at the Duathlon means the male and female winners of that second race in the series will head into the Triathlon as co-leaders with O’Shea and Suriadi.

Of course, the MetaSprint Series isn’t just about the elites. Some 1,500 athletes of all ages, shapes and sizes took part in either the Sprint, Discovery, Youth or Kids races at the Aquathlon yesterday. With the waves set out across a two-and-a-half-hour stretch, Palawan Beach was one, big, family friendly festival of swim-run fun, where kids could watch their mums or dads race and then the roles were reciprocated.

The festival site was compact, with body marking, bag drop, transition zone, the event expo, the start and finish lines, and the tented recovery area all less than a minute’s walk apart.

The vast majority of athletes took part in the Sprint Distance races, where the athletes competed in mostly five-year age group bands, while the Discovery distance category had a simpler two-band system, with the age of 40 being the dividing line. Featuring a 250m swim and a 2.5km run, the Discovery race is perfect for newbies to the sport of aquathlon, or for athletes returning for injury.

The Youths contest, which over the years has unearthed some of the present stars of the local triathlon scene, was also raced over the Discovery course and distance. And if the performance of the latest crop of 12-15 year-old boys and girls is anything to go on, the future for the sport in Singapore is in good hands.

Sean Patrick and Samir Varma led the boys out of the water, but it was another duo, Jay Lilley and Russell Lee, who set the Sentosa road on fire during the run leg. Coming out of transition together, the pair quickly passed the four boys who had out swum them and then battled for the win. It was Lilley who proved the strongest down the stretch, taking the win in a time of 14:14. Lee crossed the line 14 seconds behind, with Valentin Van Wersch rounding out the podium.

The Youth girls race also featured a thrilling dual. Herlene Natasha Yu was first out of the water, 15 seconds ahead of Mae Singer and Emma Middleditch. While Singer faded, Middleditch set about reeling in Yu, and it wasn’t too long before she made the catch. Yu hung on as long as she could, but Middleditch was just too strong for. The youngest of the famous clan of Middleditches broke the tape in 15:08 minutes, a time only beaten across both genders by the podium pacers among the male Youths. Yu claimed the runners-up spot, some 30 seconds behind the winner, with Siobhain Doyle the third girl across the line. 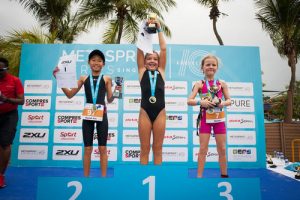 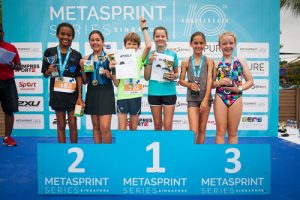 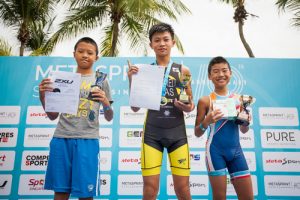 The boys race had a runaway winner, Ludovico De Ferrari breaking clear on the swim and then consolidating his lead with an even more impressive run to win in 9:06. The runner up Elgin Low actually had the same split for as Ferrari for the 1.5km run, but the 30 seconds he lost in the swim proved crucial. James Smith prevailed in a classic battle for third, just holding off Josiah Ming and Marc Feddal.

The girls put on probably the tightest race of the morning, with only five seconds separating the first three girls over the line, and just a 15-second spread for the first five finishers. Harriet Strand emerged as the winner, chasing down Sienna Rigg on the run for the title. If the race had been just 100 metres longer, the third-place finisher Sybella Hawley might have won, as she charged through the field after losing nearly a minute on the swim.

And so with the conclusion of another thrilling Sunday morning on Sentosa, the 2017 MetaSprint Series moves onto the F1 Pit Building on March 19 for the Duathlon. To register for that race and for full results of yesterday’s Aquathlon, go to www.metasprintseries.com. 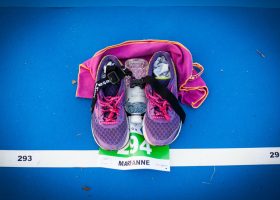 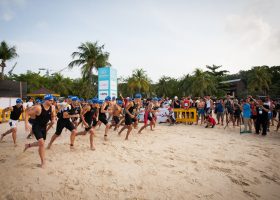 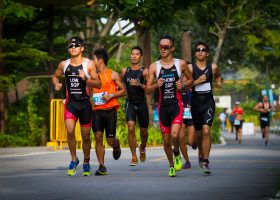 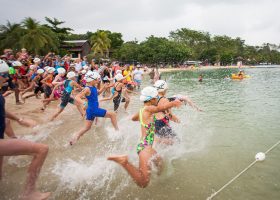 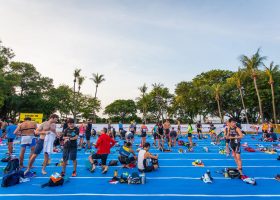 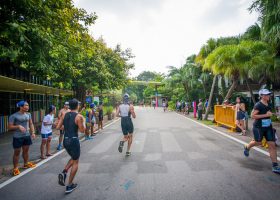 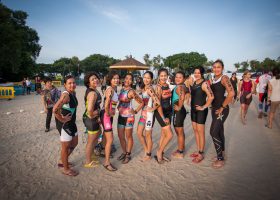 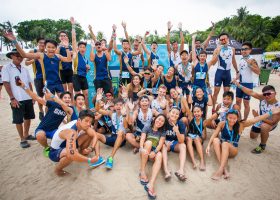 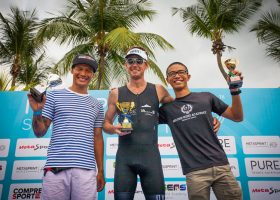 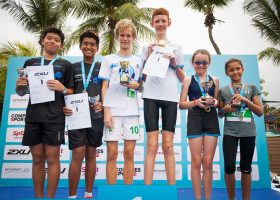 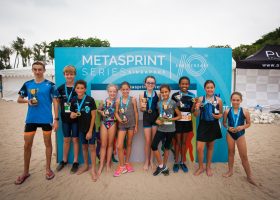 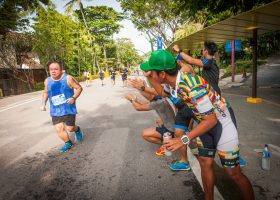 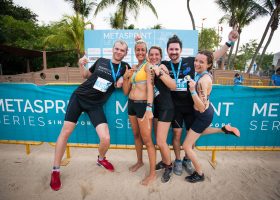 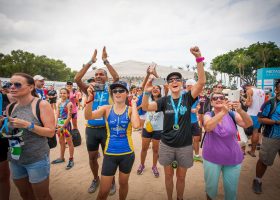 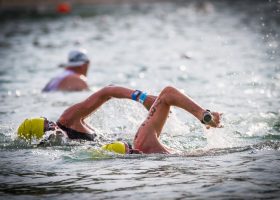 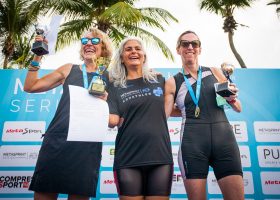 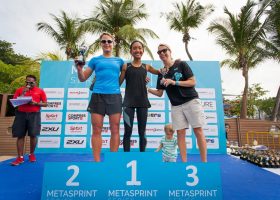 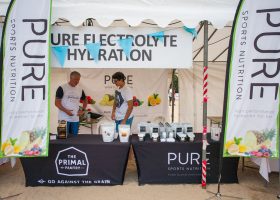 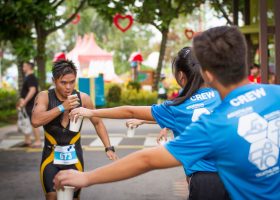 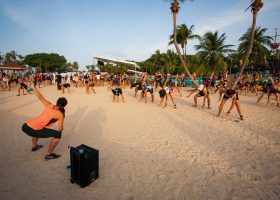 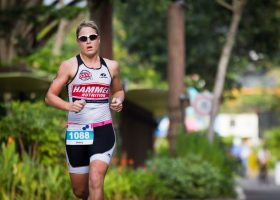 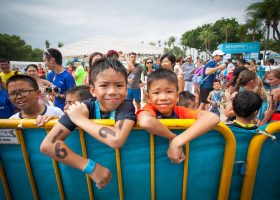 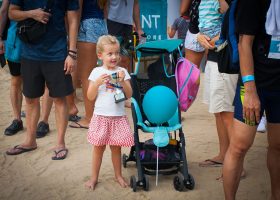